The Lady in the Lake

Meet Lisa. Half hippy, half goth Mum of four, wonderful friend, model, and Britain's only below knee amputee pole dancer. Oh, and she can sword fight! When Lisa asked us for a mask and crown for an upcoming photo shoot we decided that we wanted to share her story alongside the photos as both were beautiful and inspirational. 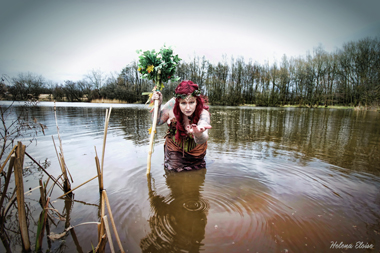 Lisa lost her leg following an accident nine years ago. Her self esteem was low when a friend offered her a photo shoot and she had her picture taken by David Draken Watkins. He showed her and the world she wasn't unattractive. So Lisa decided to seek help and be the person she wished to be.

'I realised my whole life I'd lived with feeling bad about me and if I wanted folks to treat me as I wanted, I had to see it make it more obvious I was a good person who's fairly attractive with an honest body like most people's. 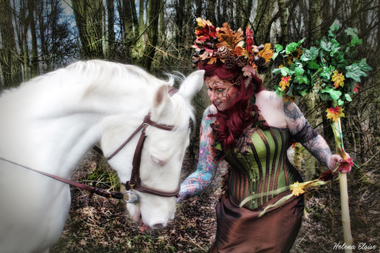 I started this subtlety but as confidence grew, my hair and my clothes became my face - the positive confident outgoing part. I still have plenty of days just normally dressed and living a normal life. But dressing, modelling, talking I think helps others see they're not alone in anything. We all have problems, we all want to take risks and are afraid. I want everyone to be free to be whom they dream they can be.'

Now Lisa models, counsels other amputees, does positive speaking and stands in daft places for pictures. Like power station roofs, volcanoes, or, in this case, in a lake in February.

Working with photographer Helena, they decided to do a woodland water shoot - which is no mean feat on crutches and one leg.

The tide was rough due to the wind and the water was only four degrees but she wasn't going to let that stop her. Lisa's lovely partner Gav got in the water first, holding her hand and waist while she hopped backwards then he lifted her into the drop up to her waist. She had a few wobbles but a trusty stick and out of shot Gave saved the day. 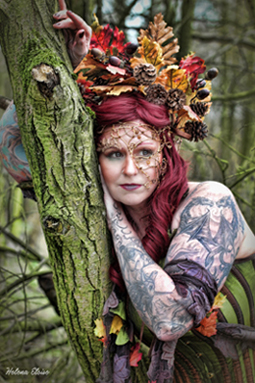 Nor was that the only excitement. When they arrived on site, Helena spotted a horse and asked the owner if could they use it. Sparkey was rather frisky but Lisa dropped the crutches and held onto him to balance. This meant being taken all over the place to stay upright but they got the shot. 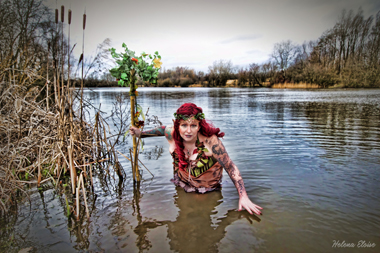 In addition to standing around in freezing water for her clients Lisa creates her own accessories. For this shoot she designed a new leg by building up clay onto an NHS frame. She forages for props and never parts with an item, just builds on it so no two shoots are ever the same.

We're already planning future projects with Lisa because she's such an absolute joy to work with - enthusiastic, creative and like us, knows that playtime is important. You've got to love what you do if you're going to do your best.