The Bird in a Gilded Cage

The word confinement originates from the mid 1600's and derives from France. It conjures up all manner of images - most of which befit methods of imprisonment and torture. So, what does this every day word mean to you dear reader? 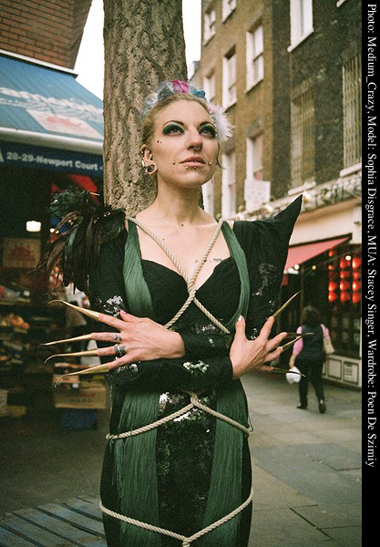 Confinement is a noun, a 'doing word' thus indicative of mutual participation, consensual or otherwise....

Running parallel to its seemingly negative connotations, however, is a sense of illicit opportunity. One which, like the fine line between pleasure and pain, sex and death, invites exploration. The images accompanying this modest feature of enlightenment, attempt to challenge the commonly held notions of confinement.

Reactions to this most public imposition of restriction is mixed-some smile, others glance, many take photos to share with loved ones, Facebook et al. 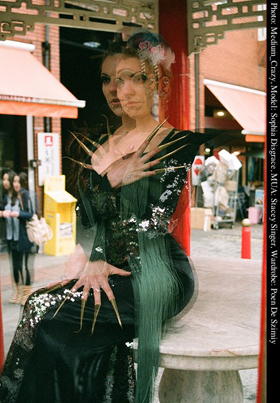 Like an exotic bird I stood, peacock proud and open to all, yet inherently untouchable.

There is a well known saying "If you love something let it go, if it comes back to you, it's yours forever. If it doesn't, then it was never meant to be".

May I pertinently add that if you love something, capture it, cherish it and hold it for all eternity. Never let go.

And now a few words from the designer- Simonetta Sabo of London, www.simonettasabo.com. I talk to Simonetta about London style, childhood dreams and a penchant for a certain J.Galliano...

What inspired you to become a clothes designer - were you interested in fashion and creative outlets as a child?

I don't really know when and how I decided to be a fashion designer, I just always wanted to be I think, ever since I was born! I never wanted to do anything else as much as fashion designing. My earliest memories are from being a little kid, designing dresses for my barbie dolls and my Grandmother sewing them for me. In kindergarten I was wearing my designs as my Godmother was a seamstress and I always asked her to sew nice clothes for me. I can remember standing next to her, giving her directions. 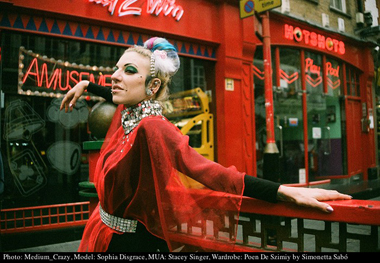 You are originally from Hungary and moved to London a couple of years ago. What are the most prominent differences between London and Hungarian fashion?

I think people in London are more brave fashion wise, than at home, actually this is the reason I moved here. I see a lot more potential here for finding my customers than back in Hungary. Unfortunately in Hungary, people are not brave enough to wear extreme, colourful, individual garments. However, here you can find people from every part of the world, from every kind of culture, everyone has different tastes and people don't really care what others wear. Anyone can show their individual style, without barriers.

Do you have any favourite designers? If you could work for any of them who would you choose and why?

My favourite designer is John Galliano. I think he is the most talented fashion designer! He has such a huge imagination and such creativity, he takes fashion to a higher level, as never seen before.

His talent is uplifting, fascinating - what he does is more that fashion, it is pure art, this is why I love his work. He isn't afraid to be different. 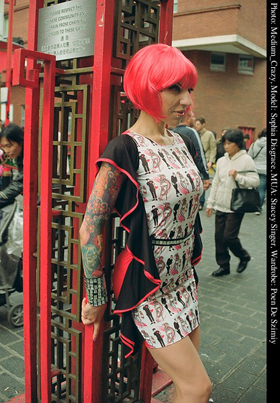 Your designs are wonderfully eclectic, with a strong use of colour and embellishment, what's the longest you have spent making a piece?

I think the hardest ones are the garments made from crisp packages. I need to work a lot on the material to make it wearable and nice looking. Just the cleaning of each empty packet (I typically use 100 of them for each dress) seems to take forever. Sometimes I work on them for several days but it is really depends on the design.

If you could pick a famous person-dead or alive, to model your clothes, who would you choose?

I don't really have a huge desire to work with anyone. I'm truly happy with everyone I work with and its nice to get to know them whilst doing so. But just to mention a couple of people, I think I could work well with Avril Lavigne or Lady Gaga, as they also have a really crazy sense of style. I can imagine their attitude would work well with my extravagant designs! 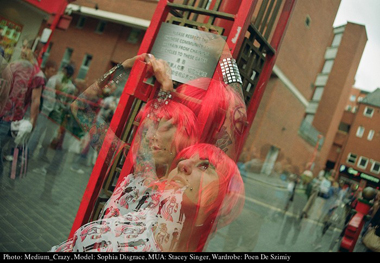 To date you have had a very impressive career as a designer. You have won numerous awards for your work and exhibited it across the world, including in Las Vegas! What's been your proudest achievement so far and what hopes do you have for the future?

My hopes for the future are secret, I don't like to say my plans out loud to everyone. Everytime I have, they've never come true! Now I keep everything a secret and slowly I hope to reach my goals and well, you will see! My proudest achievement... Maybe when I graduated as a fashion and style designer. I was waiting for that moment my whole life and when I got my certification I couldn't believe it, a whole new world opened up for me! Suddenly I could say, yes, I did it, I've officially become a fashion designer! 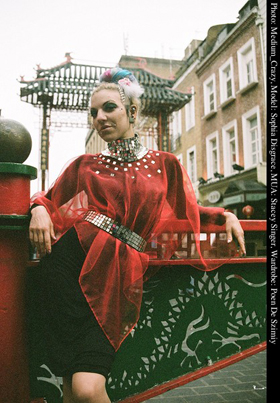 Lastly, you say on your Model Mayhem page that 'I refused to follow any styles and then I created mine' this is a very bold statement, almost punk in its refusal to conform. Would you agree, are you presenting a true alternative to the mainstream?

Maybe deep inside my heart, I am a bit punk. To be honest, I have a big problem with fashion, I always have done. After the turn of the century it seems to me, fashion got stuck. Designers don't do anything new, they just bring back the previous decades' fashion. Although, they do it in a more modern way, they do not really show anything fresh, nothing we haven't already seen before. When I was wearing my Mother's old clothes, I found people actually thought they were new and stylish, then I realised that there is a huge problem somewhere. It seems we have lost the inspiration to create totally new lines, new kinds of garments and memorable pieces.

Also the quality of the clothes are really poor now, the industries want us to change clothes more often, by offering us cheap garments, which only last for a few washes. I would really like to change some of these problems, I have so many ideas in my mind! I'm still finding ways to make them possible, and who knows, maybe one day I will be the one to create a fresh, never seen before line in fashion!

Find out more about Simonetta Sabo's work and Poen De Szimiy at www.simonettasabo.co.uk