The alternative has gatecrashed the mainstream, and they're non the wiser

Alternative style has always influenced some of mainstream fashion's most beloved designers, but beyond punk and gothic style, when it comes to alternative fashion, most fashionista's aren't even aware of the beloved sub cultural styles that we so adore, so when notes of kawaii and cybergoth start to creep up amongst the designs at London Fashion Week, we're clearly gatecrashing the party, and in amazing alternative style. 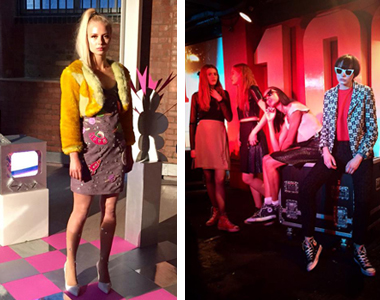 Notes of alternative style creeping up in mainstream fashion are certainly nothing new, don't get me wrong, I've long adored the likes of Meadham Kirchoff adding notes of lolita and kawaii style to their outlandish, and sadly shortlived collections, to the notes of dark gothic style by Gareth Pugh. But this season after wandering around admiring the subtle notes of alternative style in the designer showrooms at London Fashion Week, it's quite clear that we've gatecrashed the party, and they're non the wiser..

When photos first started surfacing on social media from Clio Peppiatt's SS16 show, the alternative influences were right there, from the dayglo fur jackets, to the metallic bustiers, mixed in with vibrant prints, channelling kawaii and cybergoth style. But it doesn't stop there, a quick glance at Fyodor Golan's collection and you could easily be mistaken for thinking that you've stumbled upon a great lost Cyberdog collection, from the emblazoned Transformer's motifs, to the day glo crosses and cyber twist's on gothic bustle skirts, every great element of cyber style was there, without a hint of oontz in sight...

The new emerging designers certainly seemed to be taking a pinch of inspiration from alternative style, from Obscure Rebellion to Le Kilt.

With plenty of notes of kawaii, cyber, punk and even steampunk style in abundance amongst the designs. 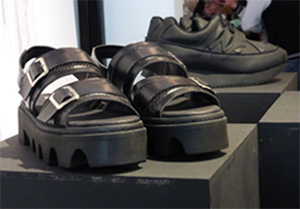 Designers like Stephen Jones Millinery and Zandra Rhodes are hardly new to us alternative fashionistas, so their presence amongst the new designs certainly made for a breath of fresh air, not to mention a surprise appearance amongst the showrooms from beloved alternative footwear label, Underground, who've quietly snuck in and infiltrated mainstream fashion with their take on nu goth style, I'm sure we'll all be adoring the return of goth friendly platform trainers next season! 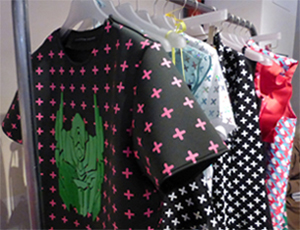 From the alternative styles sneaking in to the designer showrooms, to the fringe shows waving the flag for independent, alternative inspired style. Of course not all of London Fashion Week was screaming alternative style, the majority of mainstream designer's shows would fail to move even the most blackest of gothic hearts, with designs that left you feeling more than a little cold, with the return of the same washed out repeated styles, but the new designers and unspoken independent labels at the show have proven than alternative style is sneaking it's way into mainstream fashion in more ways than one, and who knows, maybe next season we'll see some lavish, well made latex wares and more day glo cyber prints making an appearance, but for now we'll keep on gatecrashing the party, hoping to spread some of our innovative, cutting edge style amongst the mainstream, making for a much needed breath of fresh air.