An alternative model hailing from South Africa, Lilith Seaborne has been dipping her toes in the world of alternative modelling creating a vast range of styles from the dark to the creative. 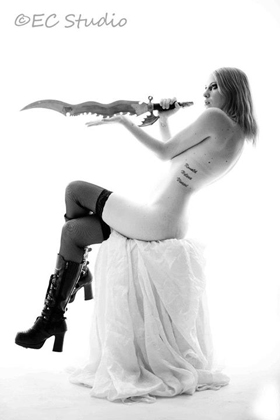 How did you start modelling? Was it something that you always wanted to do, or did it just 'happen'?

A friend of mine needed models for his website and album art when I was 19, so I decided to try it out. I never thought about modeling before, but once I did that shoot, I was hooked!

What drew you towards alternative modeling?

All mainstream models look the same, so how exactly is that fun? I also don't want to look like a duckface monster haha.

Do you have any fellow models or heroines who have inspired you?

No one really, since I never thought of modeling before. I did really love the look of Dita Von Teese though.

What kind of shoots would you like to work on in the future?

Oh gosh I have so many I want to do that I'm so excited about! From body paint shots to clown like shots.

What has been your biggest modelling achievement so far?

I did an international catwalk hair show for Paul Mitchell, where Robert Cromeans cut my hair on stage!

How did you discover your particular interest in alternative fashion?

These things aren't really discovered, they just are.

Are there any companies or designers that you'd like to work with?

I like to work with all alternative companies and designers. I respect what they do and I love to promote them. They are all local here in South Africa.

What are your goals & aspirations for the future?

I would love to inspire other people to go out and do something that would make them feel god about themselves. I would also like to shoot more original ideas :)

You can find out more about Lilith Seaborne & her work over at http://lilithseaborne.webs.com & www.facebook.com/lilithalternative